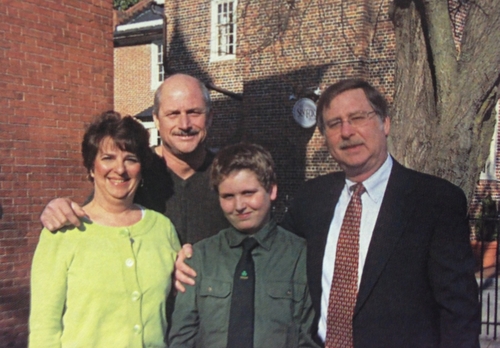 Karen and Fred were matched with their son Ryan through Project Wait No Longer, when Ryan was 12 years old. This is their story:

When we first met Ryan, he was very shy and nervous around us. To be honest, we were all very nervous. Fred and I tried to hang back as much as possible to allow Ryan to reach out to us in his own time. We asked Ryan if he wanted us to return to visit him again, he said yes. When we left that first visit, Fred turned and said to me, “he needs us as much as we need him.” That was when we knew we were going to try to make this work. The second time we went to visit Ryan, he was hiding behind a couch; it took him about a month to come out of his shell and willingly interact with us.

When Ryan was placed with us we had a few bumps in the road as a result of his past and having been moved around so much. Ryan tested us to see if we would “break” and give up on him as so many had done in the past. Since then, it has been relatively smooth sailing. We have challenges like any other family - but it feels like Ryan has been with us forever.

Ryan has always felt safe in our house which is very important to a child who has experienced the abandonment and violence in his life. He embraced our extended family almost immediately and began to call his grandparents Pop Pop, Nan, Gram and Pop. On the other hand, Fred and I were “Fred” and “Karen” for much longer! The counselor we were seeing for family therapy suggested that we start referring to ourselves as Mom and Dad. The first time I said, “why don’t you help Dad with that?” Seemed to be Ryan’s turning point. He immediately began referring to us as Mom and Dad.

If I had to give advice to new families, I would say to try and have open dialogue with your child. They have been through so much, much of which is not documented on paper. Only your child can share with you their fears and concerns. Try to gather as much information as you can from them without being pushy. Create a safe environment where they can be completely honest. Mostly importantly, be patient. I think patience is really the biggest thing. You have to give your kids time to learn that they can trust you. Once they do, they will come to you to get their needs met. Be sure to let them know you care. There is a fine line between being patient and appearing to be aloof. Consistently, at all stages of this journey, find ways to show your kids you care and eventually they will begin to heal and trust again.

So where are we now? Ryan has been home for over 2 ½ years now and is amazing, well adjusted, 14-year-old with quite a mouth on him! He is currently getting 90’s and 100’s in his Catholic high school. He is playing softball on a co-ed league and has had the same best friend since the 7th grade. His parents (that would be us) are crazy about him and think he’s an overall great kid!