“You have two mothers. I’m just the lucky one who gets to raise you,” my mom always said. “Your other mother loved you so much she gave you away.” I was given up for adoption so that I could have a better life. And I did. I had a mom, a dad, a brother, a house, food, and lots of extras – like great vacations because my dad worked for United Airlines.

Nothing seemed amiss until I reached my teenage years, but I passed it off as “teenage angst.” I felt an insatiable need for validation, love, and acceptance. At the age of 24, I learned that if my birth mother wanted to find me I had to “open the file.” So, I reached out to the adoption agency that placed me. They asked me to come in. I saw two pictures of her. She looked sad. She didn’t smile. Something didn’t feel right. There was also a letter — note might be more accurate. It said, “Have my daughter call me.” She ended it with her address and phone number and that of her parents. My friend thought this was great. Her parents were only 10 minutes away. He called the number and shoved the phone into my hand. I heard “Hello,” but I hung up. I wasn’t ready.

I was born in 1971, at the end of the “Baby Scoop” era, when adoptions were often done in secret under a cloud of shame. Adoption was seen as a solution when unmarried girls found themselves pregnant. The girls were often sent away to live in an institution until their babies were born. Adoption protected an unmarried woman’s reputation and her prospects for marriage. These young women were told to go on with their lives and forget about this experience. To get married and have other children.

After giving birth to my brother a month early, my mom’s next two pregnancies ended with babies that were born too small to survive in 1969 and 1970. Adopting me was a way to have more children that they desperately wanted.

Until I gave birth to boy/girl twins, I didn’t give my adoption serious thought. To me, it was like being right-handed. A trait that was a part of me, but not very significant. It wasn’t until I looked into the eyes of my daughter and saw myself staring back that I realized it might be a bigger deal than I thought. I’d never seen anyone that looked like me before. I began to wonder if I looked like my birth mother.

My understanding of my adoption froze in the explanation I got sitting in my mom’s lap when I was three years old – “She loved you so much she gave you away” I started to read books about it. They called it a trauma. I didn’t feel traumatized. But I knew if someone took one of my children away, they would be traumatized.

During our first pregnancy, I read the same book to my unborn child every night, using the same sing-song voice each time. “OK, Beanie Baby. It’s time for a story. How about Brown Bear Brown Bear by Eric Carle and Bill Martin, Jr.?” The day she was born I again read her that book. Her eyes widened, and she looked at me as if to say, “I know that! Was that you?” I knew she was not a blank slate at birth. I had shaped her already before she was born — and I didn’t even carry her. I tried to imagine if someone took her away. What hole would she feel if she never heard my voice again? Smelled the familiar scent of my wife who carried her? I started to think of my own birth mother. What holes did I feel after they took me away? Did I miss her smell? Her voice? What would I feel if everything familiar was taken away?

I found a group meeting for adult adoptees at the Barker Adoption Foundation in Bethesda, Maryland. There I met other adoptees and listened to their stories. Week after week I returned and learned more about the hidden struggles most adoptees face. I came to see how many holes I had because of my adoption. It was traumatic for the little baby I was back then.

I decided to write to the agency that handled my adoption. My birth mother wasn’t hard to find. She had written every five years after I turned 18, hoping I would want to contact her. We exchanged letters through the agency. Her handwriting was beautiful. She loved my letters and couldn’t get enough. Those holes began to fill as I learned to love this woman and what she did for me.

We all need to wake up and rewrite the story of closed adoptions like mine. Adoption is not a magic wand that erases a 9-month pregnancy, birth, and relinquishment for the birth mother. It’s a life-long wound that, for some, never heals. Even if the birth mother knows it’s the right thing to do for the baby, her heart is never going to be the same. These women deserve pre- and post-adoption assistance to work through the decision and the grief that arises after they relinquish their child to be adopted.

Parents who adopt babies sometimes struggle parenting a child who has trouble attaching to them. My parents were told to “treat her like she’s your own” and were handed an index card with the times I slept and what I ate. I didn’t do anything on that index card. In fact, I projectile-vomited the formula they said to give me. They deserved more preparation and support than that.

And I needed a more sophisticated story than “She loved you so much she gave you away.” What kind of lesson is that to learn about love? The greatest act of love is abandonment? I needed support to understand and work through what my adoption meant in my life.

The Barker Foundation was instrumental to my journey. There, I met people who were also adopted who I could talk to about it. Donating to the Barker Foundation gives support to anyone in the adoption constellation including access to lifelong services, even if they didn’t perform the adoption. Barker advocates for ethical, respectful and child-centered adoption practices. I value this approach. Adoption needs to minimize trauma and maximize support. 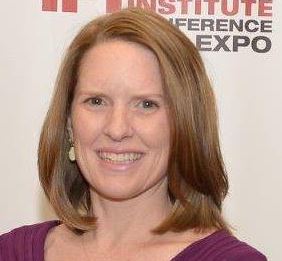 Tiffany lives in Baltimore, Maryland with her wife and three kids. She has been in reunion with her birth family (including a sister who was also adopted) since 2012.