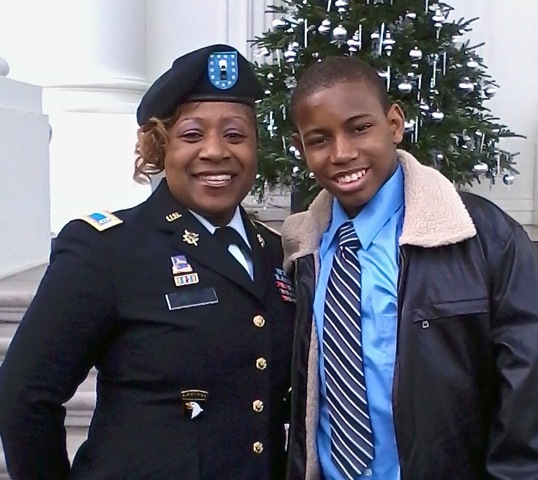 When Ta’Shay lamented to a friend that she was ready to have a family but had never married, her friend suggested she think about adopting a child. It was an idea Ta’Shay had never considered, but soon it became an idea she could not get out of her mind.

Ta’Shay, as methodical and precise as her almost two-decade military career might suggest, began researching older-child adoption and adoption agencies in the mid-Atlantic region. When she found The Barker Adoption Foundation, its history had immediate appeal – Barker got its start nearly seven decades ago helping pregnant Women Accepted For Volunteer Emergency Service (WAVES) place their babies for adoption.

At an initial information session at Barker, Ta’Shay spent time with Marilyn Regier, Barker’s director, exploring the joys and challenges of older-child adoption. Sure that Barker’s Project Wait No Longer (PWNL) program was the right path to parenthood, Ta’Shay began fulfilling the requirements for the program, including attending a six-week PRIDE class and determining whether there were specific conditions or ages that she felt she could best handle when being matched with a child.

At the same time, Greg, a pre-teen boy, was living in a group home in West Virginia. Brought into state care after his family situation deteriorated, Greg remained hopeful that he might have the chance to be part of a permanent, stable, loving family.

Initially, Ta’Shay told Barker she was only open to children ages 10 or younger. But when Greg’s file crossed the desk of Beverly Clarke, director of Barker’s PWNL program, she immediately thought Ta’Shay and Greg might make a good match. Her feeling was prescient – after some soul-searching, Ta’Shay agreed to review Greg’s information and explore the possibilities. When she did, “I saw his picture and fell in love,” she says.

Love at first sight is never enough in the PWNL program, however, so Ta’Shay and Greg began the slow process of getting to know each other. Ta’Shay first travelled to West Virginia to meet the adults responsible for Greg’s welfare – his social worker, guardian ad litem, and caregivers from the group home where he was living. Ta’Shay brought pages and pages of questions to ask, along with a photo album to be given to Greg to introduce Ta’Shay and her life to him to see if he might be interested in meeting with her. Greg’s answer was an unequivocal yes. “I told my friends, ‘She’s cool. She’s in the Army. She’ll be able to protect me....”

When the two had their first introduction by phone, what could have been an awkward conversation between strangers quickly felt just right as the two bonded over Dragonball Z, their favorite cartoon. “We both love the character Piccolo and once we figured that out, the rest of the conversation was easy,” Ta’Shay says.

Ta’Shay began visiting Greg on weekends. Two months after meeting, he made his first trip to her home in Virginia. They continued to learn more about each other and deepen their bond over bowling and trips to Cabela’s. At first, Greg called Ta’Shay by her given name, but soon began alternating between “Ta’Shay” and “Mom.” Four months later, when Greg went home with Ta’Shay for good, it was all Mom.  "I thought I was dreaming. My life was finally beginning," Greg says.

While the transition to Greg’s new life seemed seamless at the start, both Ta’Shay and Greg say the honeymoon phase didn’t last forever. Once the newness wore off, challenges arose. “Greg said he wanted to go back to West Virginia where he has a brother living with his grandmother and a sister in foster care. He missed them and wanted to be there instead. We also had different ideas about limits on things like the Internet. A lot of it was typical teenager stuff, but I had never had a teenager before so didn’t know what was typical and what was not.”

Support from PWNL and Others

Ta’Shay sought help immediately, speaking with PWNL staff, Greg’s social worker, and staff at his former group home. They each also entered therapy to explore their concerns and reactions to each other. “Greg learned that it’s okay for people to say what’s on their mind as long as they say it in a respectful way. And he learned that there’s no such thing as a perfect parent,” Ta’Shay says. “We both came to realize that we are going to make mistakes and the key is to try and learn from them so we don’t make them again.”

It also helped to look at the challenges from the other’s perspective. Ta’Shay says there were a number of heart-breaking moments that brought Greg’s old reality directly home for her. “I found out Greg had never had a birthday party before his first birthday party with me. I took him to the store for shoes for the first time and learned he had been wearing shoes two sizes too small. I took him to the PX to buy clothes and he was awestruck that he could just pick up jeans and go try them on. I was teary-eyed because he had never experienced so much of what most of us simply take for granted.”

Ta’Shay also made an enormous effort to integrate Greg’s biological family into their lives while helping Greg learn how to set appropriate boundaries. “For our first Thanksgiving together, we went to West Virginia to see his sister and grandmother. The next Thanksgiving and Easter his sister came to us to visit. They will always be part of Greg’s family and I want to help him maintain contact at the level that’s right for him.”

Through this all, Ta’Shay says their extended family has been an immense source of support. “My mother keeps reminding me that any issues we might have now are not the same issues we had before so we are constantly growing.” Ta’Shay’s brother-in-law in Texas has also played an important role. “He’s proved to be a wonderful uncle who shares a lot in common with Greg. He sees Greg as another son. We have a lot of females in the family so it’s nice to have a male presence Greg can relate to,” Ta’Shay says.

Greg is now surrounded by this love full time. In 2013, Greg and Ta’Shay moved to Texas so they could be with their extended family year-round. Greg was thrilled! “I have cousins in Texas. I finally got out of a bad place and now I’m somewhere good.”

Ta’Shay is just grateful she kept an open heart and an open mind when Beverly called her. “If I had stuck to the idea of a child between the ages of six and ten, I wouldn’t have Greg with me. Even though I thought that’s what I was looking for, I was really looking for Greg.”