This week’s freakishly winter-like weather has made it even harder to get back into the groove of the school week after an extended Spring break spent in Caribbean sunshine.  This morning as we looked for winter coats in early April, loaded lunchboxes and checked on homework, I mentioned to my 4th grade daughter that we had Chinese lessons after school. 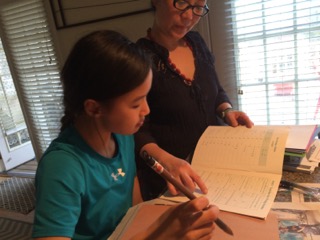 “Oh good!  Maybe we’ll do calligraphy again!” was her response, and she skipped off to meet friends at the bus stop.

My daughter, Josephine Wan, was adopted from JiangXi Province, China, when she was nearly nine months old.  In March 2007, in the efficient austerity of a government building in the five million-person city of Nanchang, we sat across from a Chinese official and pledged to keep our new baby in touch with her Chinese heritage.   As brand new parents (not of Chinese heritage), we did not really know what it would like to “keep her in touch with her heritage.”  But we did know this would be a key piece to her developing a positive self-identity as she grew up. 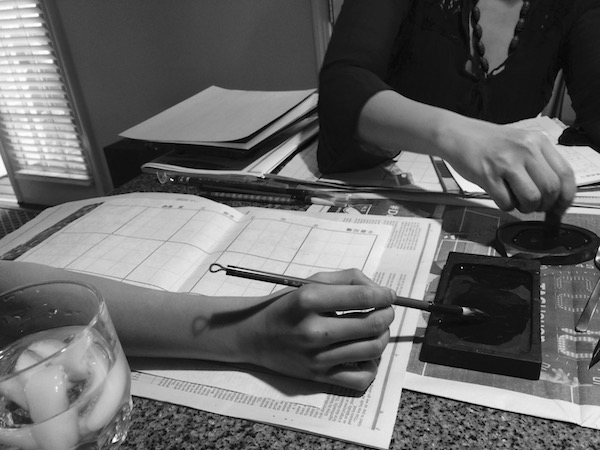 So, when Josie was about four years old, we started taking her to Saturday morning Chinese lessons at the University of Maryland’s Confucius Institute.  And we enrolled her in after-school Mandarin lessons starting in second grade.  Soon enough, though, the Chinese class became the low-point of the week.  Simply put, Chinese class was a drag. Reminders of Mandarin class were met with eye rolls and grumbles.

And eventually, a travel soccer team, basketball, homework and neighborhood friends crowded out the Mandarin and she stopped going.  She was delighted.  I felt like an adoptive parent failure.

And then we found Mei Mei.  And set out to learn Mandarin and Chinese culture…. Together.

Mei Mei is a local parent, a native of Taiwan.  Her son is in my daughter’s class at Piney Branch Elementary School.  She is an accomplished visual artist.  And I personally love spending time with her. Mei Mei and her son come to our house once a week.  We put out snacks and drink tea.  And slip into a magical hour immersed in Chinese language and culture.

Taking the language classes together has made all the difference in Josie’s attitude about the language and the classes have been a wonderful learning experience for me, too.  Sometimes, my husband and our 7-year-old son join in the lessons and we all laugh as we try to make sure we’re not confusing words like ‘horse’ and ‘mom.’  And we try out our new phrases, hesitantly sounding out every tone of, “What is your name?  My name is ….”

Recently, we spent two classes using traditional Chinese calligraphy brushes and ink, trying our hand at intricate Chinese characters.  Mei Mei instructed us on the proper way to hold the brush, and how to sit up straight.  Mei Mei coached us saying, “Do not rush through the strokes.  It’s meditative.  It’s very NOT American!” We were not just copying her strokes, but learning the theory behind the development of each character, and gaining insight to Chinese culture as we practiced characters for sky, mountain, field and love.

Now our weekly lessons with Mei Mei are a special time together.  We both look forward to it.  It’s anything but a drag.  She remains delighted, and I feel like I am keeping my promise to that nameless Chinese official.  And our promise to our daughter.