Jordan Windle and Tatyana McFadden are both amazing athletes preparing for the 2016 Summer Olympic games in Rio, to represent the United States of America.  Besides being Olympic-level athletes, they have a few other things in common.  Both Jordan and Tatyana were adopted internationally and they both have written books about adoption.  Here is a bit more information about each of these amazing athletes who we hope will see gold this summer!

Tatyana was born with spina bifida, a hole in her spine.  Growing up in the orphanage in Russia, she did not have a wheelchair so she learned to move around using her arms and hands.  In 1994, at age six she was adopted and moved to the U.S.  In an effort to increase her strength and overall health, her parents enrolled her in a variety of sports. Her favorite quickly became wheelchair races.   In 2004, at age 15, Tatyana made her Paralympic debut in Athens as the youngest U.S. athlete.  Tatyana has now attended multiple Paralympic Games and has won numerous medals.  At the World Championships in 2013, Tatyana became the first athlete in history to win six gold medals at the same competition and recently she received her fourth Boston Marathon victory.  Tatyana continues to excel in her sport and will be participating in the Olympics this year in Rio.  And when she's not competing she works as a national advocate for equal access for people with disabilities.  To learn more about Tatyana or her Olympic journey please visit: http://tatyanamcfadden.com/

Tatyana has written an autobiography entitled “Yo Sama!” about her life in Russia and her athletic journey.  It is available here on Amazon. 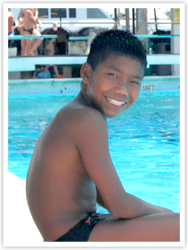 Jordan was adopted from Cambodia when he was two years old.  Jordan began swimming in the summer after second grade.   His skills were quickly recognized and he joined the diving team. At 12 years old he was one of the youngest divers to qualify for the US Olympic trials. A short time later, he won gold at the Junior Pan American Championships in Arizona, followed by silver and bronze medals at the U.S. National Championships.  Now ranked in the top five American divers, Jordan is focused on next month's qualifying trials for the 2016 Summer Games in Rio.

First, Jordan and his father, Jerry Windle are traveling back to Cambodia for the first time since Jordan was adopted.  According to Jordan’s father, Jerry this is an important time for Jordan to visit his birth county because he can understand the emotions and handle the intensity of the trip. Jerry Windle, Jordan's adoptive father, continues, “He is an American citizen today," said Jerry Windle, reflecting on everything that's brought the family this far. "But the truth is, he is a child of Cambodia, and Cambodia is his home country, and he embraces that.”

When Jordan was asked what he would say to orphaned or abandoned children he responded, “I was the same as them, an orphan. Luckily, I got adopted, and I am doing really well in my life. If you are given a chance, like a little chance, nothing major, you can work from that and achieve something great and show people that you can do well in life."

Jordan has also written a children’s book entitled: An Orphan No More: The True Story of a Boy: Chapter One.  The book discusses the desire for a family, love and happiness and the pain that accompanies being different. For more information, click here.

To learn more about Jordan and his Olympic journey please visit his website: http://www.jordanwindle.com/index.html

We wish the best for these Olympic hopefuls! Go USA!