That text signaled that we were finally nearing our destination in New York’s Chinatown.  We’d spent our Saturday on long journey: in the mini-van north on I-95 to the NJ Turnpike and Garden State Parkway; followed by a 45-minute train ride on New Jersey Transit to New York’s Penn Station; and, ending with a hop on the “A” train headed downtown.  In our own American way, we had joined in the world’s largest annual human migration to celebrate the Year of the Monkey. Each year, in the lead up to Chinese New Year, an estimated 700 million people – twice the entire population of the United States – clog China’s railways, airways and motorways to get “home.”

In our case, getting “home” for the Chinese New Year is a reunion with some of the families we adopted infant daughters with in JiangXi, China, in March 2007.  The girls – Josie, Katie and Lilly --are now nearly 10 years old, loving soccer, Harry Potter, and sleep away camp.  Their days from the Chinese orphanage are well behind them, and they have no conscious memory of their life in China.  But as we entered the little Chinese restaurant on Mott Street in New York’s Chinatown, the three girls immediately lit up to see one another, hugged and settled in on their own “kids” side of the table – begging to play games together on their parents iPhones.  Their bond is undeniable.

My daughter, Josie, refers to the girls from our adoption group as her “China Sisters.”  And really, that’s exactly what they are.  In China, each child from the same orphanage shares a surname based on the location of the orphanage.  All of the girls adopted from Josie’s orphanage were given the first name “Feng” followed by a second, differentiating word/character.  The name given to my daughter in the orphanage in Ningdu was Ning Feng Wan (loosely translated:  Beautiful, graceful, phoenix from Ningdu).  Other girls had similar names like Ning Feng Yuan.  Ning Feng Lian.  They’re tied together through name and history.

As in many family gatherings, the "grown ups" started telling “stories of yore” -- and each time they’re told they grow a little bit bigger and a lot funnier.  And now the girls are old enough to hear those stories and laugh along, and appreciate their parents’ sheer joy in reminiscing about the crazy trip to China when we became families.    And some of those tales told around the table that night were inevitably prefaced with, “Remember the time….” 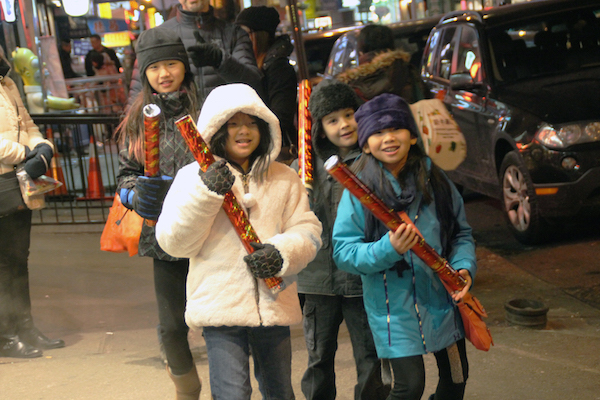 …we went to the super fancy restaurant in Nanchang and Sam and Heather were taken to the fish tanks in the back to pick out the fish and seafood we would eat for dinner?

… we shopped at the Chinese Walmart?

… we celebrated Katie’s first birthday in that banquet room and we thought they’d served squirrel for dinner?  It was the spiciest food we’d ever eaten!

After our dinner at WoHop, we again bundled up in layers of coats and hats and gloves and braved the weekend’s “Arctic Blast” to explore a bit more of Chinatown.  We set off traditional New Year’s “poppers” of confetti and trolled the tzotchke shops to get warm.  We found a bakery with favorite Chinese sweets like red bean custard buns and almond cookies, and washed them down with Swiss Miss Hot Cocoa.

The next morning, we gathered with the NYC Chapter of Families with Children from China (FCC) to prepare for the famous Chinese New Year parade throughout the streets of Lower Manhattan.  Despite the severe cold, 75 diehard children, teens and adults marched in the parade with the FCC group, holding up large papier mache monkeys to symbolize the arrival of this new year.  Josie, Katie and Lilly marched at the very front of the group, holding the FCC banner.  With pride. 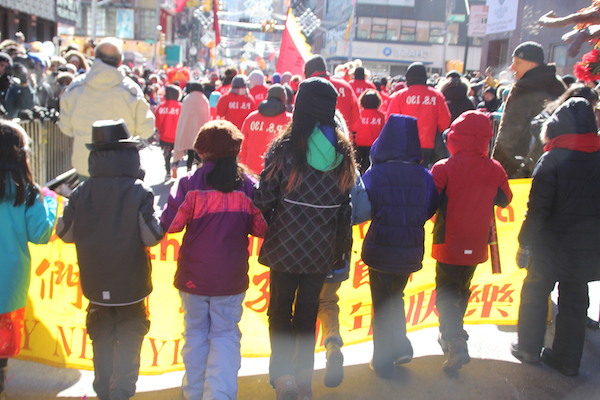 There are a lot of questions we cannot answer about our daughters’ pasts.  And this is tough. We may not be able to explain why they are so short/tall or right- or left-handed. We don’t know the details surrounding their birth, and don’t even know the actual date of their birth.  We don’t know about birth siblings.  We don’t know why they were left on the orphanage steps.

But we do know a lot of important things that need to be shared and celebrated.  We know they are loved beyond measure.  We know they are special, beautiful, smart and spunky girls that have completed our families. The history we do know about -- the history that started in a conference room at the Gloria Plaza Hotel in Nanchang, China – can be celebrated. So, at this new year, we celebrate the family – China Sisters and all – that was formed through adoption on March 11, 2007.  Each year, for one weekend, we put aside soccer games, carpools, work, and errands on hold to join the Great Human Migration to ring in a new year together, as a family.